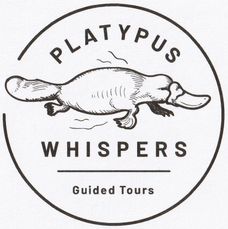 Platypus and Wildlife Tours in Maleny

The Platypus has a reputation of being an elusive creature that only appears at dawn and dusk. Join Platypus Whispers for a walk on the wild side, as we follow the Obi Obi Creek through Maleny and seek out this incredibly unique animal. 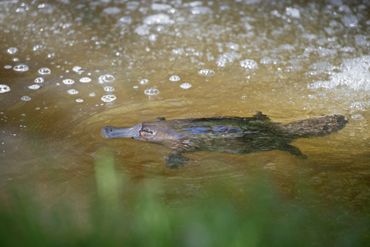 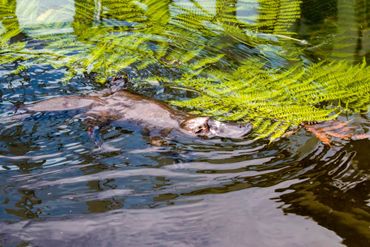 They are sometimes difficult to spot in the wild, but with our wildlife tour having a 95% success rate, spotting these unique animals will play an integral part of our tour experience.

They are found along the East Coast of Australia and Tasmania, living in freshwater rivers, streams, ponds and lakes. The platypus will come out of their natural habitats around dusk and dawn.

Breeding occurs between June and October, with emergent young starting to appear as early November. The female builds an elaborate platypus nesting burrow, which can be up to 30 metres long. Two or three eggs are usually laid and then incubated for one to two weeks.

There being no definitive name for the Platypus young they are often incorrectly called “puggles”, (this is the term used to describe Echidna young), they feed on milk for the first three to four months before attaining about 80% of their adult size and leaving the burrow.

Platypus Whispers offers the rare opportunity to go on a walking tour to see the elusive platypus in its natural environment. Walks will take approximately 3 hours with start times varying depending on the season

With 10 years of photographing wild platypuses, our tour guide provides the passion and extensive knowledge for everyone who decides to come along.

Local resident of Maleny, Platypus Whispers strives to elevate the recognition of the region and take pride in what wildlife is preserved and showcased to locals and tourists.

The walking track is rated as a grade two on the Australian Walking Track System. With a flat and even surface, people with wheelchairs and walking aids are also encouraged to join in on the fun!

Location of the Tour

Maleny is located 45 minutes west of the Sunshine Coast CBD. It is renowned for its lush environments and breathtaking views nestled within the region’s hinterlands. With the likes of the Baroon Pocket Dam and multiple acres of subtropical rainforests, Maleny is enriched with wildlife and Platypus Whispers offers the opportunity to explore the Obi Obi Creek to witness the iconic platypus and much more.